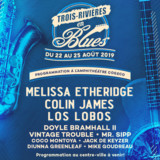 Trois-Rivières, July 24, 2019 – The Trois-Rivières en Blues Festival organization, presented by Ameublements Tanguay, is pleased to unveil the complete program presented at the Cogeco Amphitheatre during its 11th edition. From August 22 to 24, Colin James, Mr. Sipp, Doyle Brahamhall II, the duo of Diunna Greenleaf and Mike Goudreau and Jack of Keyzer are added to the already announced artists, Melissa Etheridge, Los Lobos, Vintage Trouble and Coco Montaya.

Doyle Bramhall II, a 51-year-old American composer, guitarist and singer, is known for his collaboration in Eric Clapton’s band, where he was the second guitarist in 2004. Playing on a Fender guitar whose strings are inverted like Albert King, he grew up with brothers Stevie Ray and Jimmie Vaughan. In 2016, he released his fourth studio album, Rich Man, and in 2018, he launched Shades featuring a duet with Eric Clapton (Everything You Need) in addition to a collaboration of Norah Jones. To to be missed, juste bebofre Melissa Etheridge on August 22th!

A true Canadian blues icon, Jack De Keyzer is a 64-year-old singer, guitarist and producer who is as comfortable with blues, soul than funk. He has won two Juno Awards in 2003 and 2010 in addition to seven Maple Blues Awards. In 2007, he won the first prize at The International Songwriting Competition for his song That's The Only Time and in 2019 for My Love is Gone from the album Electric Love. Jack De Keyzer has worked with the greatest, including Etta James, Otis Rush, John Hammond Jr., Bo Diddley, Ronnie Hawkins and Blue Rodeo. Giving over 150 shows a year, he owns his own record company, Blue Star Records. It is for him a return to the festival, after igniting Badeaux Street two years ago.

Colin James will be headlining the evening of August 23 at the Cogeco Amphitheatre. After a remarkable presence at the festival in 2016, the artist recidivates for the pleasure of blues lovers. In 2018, Colin James presented Miles to Go, a 19th album in which he enjoys playing songs from his favourite artists, Howlin 'Wolf, Blind Willie Johnson, Little Willie John, Blind Lemon Jefferson and Robert Johnson, to name only those. Added to this are two new original songs for the delight of its admirers. This new opus is the perfect opportunity for the 53-year-old musician to indulge in a Canadian tour that will stop in Trois-Rivières on August 23rd.

The winner of the 2014 International Blues Challenge in Memphis, Castro Coleman, aka Mr. Sipp, is a 43-year-old guitarist and singer born in the cradle of blues, Magnolia, Mississippi. On screen, he can be seen in Get On Up where he plays Les Buie, the first guitarist of James Brown. In 2016, he won the Blues Music Award for Best New Artist for his album The Mississippi Blues Child. Outstanding stage performer, Mr. Sipp took his first steps with gospel music, including The Canton Spirituals and The Pilgrim Jubilees. He then launched his own band, The True Believers, with which he released his latest album at the end of 2018, Back To The Roots. Mr. Sipp is likely to make new friends with his energizing performance ... what a beautiful discovery!

Winner of The International Blues Challenge in Memphis in 2005 and winner of the Koko Taylor Award at the Blues Music Awards in 2014, powerful contralto singer Diunna Greenleaf returns for the third time to the festival. Diunna Greenleaf mixes soul, gospel and blues with passion. For three years she was president of the blues society in Houston, Texas, and she continues her mission to educate the youngest with the Blues in Schools program. A great lady of blues who will be accompanied by none other than the Quebec guitarist Mike Goudreau and his band to begin the evening of August 23 at the Cogeco Amphitheatre.

These names are added to those of Melissa Etheridge, headliner of the evening of August 22, and Los Lobos, Vintage Trouble and Coco Montaya who will host the evening of Saturday, August 24.

All the shows presented at the Cogeco Amphitheatre will be accessible thanks to the festival passport, which is priced between $ 72 and $ 112 (plus taxes) in the sitting section of the amphitheatre and $ 35 (plus taxes) in the grass section. In addition, passports giving access to the Privilege Zone will be on sale for $ 300 (plus taxes). All are on sale now at www.3renblues.com , at www.amphitheatrecogeco.com , at the J.-Antonio-Thompson box office and at 819-380-9797. The advertised prices are now valid until July 30 and are subject to change after this date.