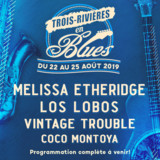 Trois-Rivières, April 23, 2019 - The organization of the Trois-Rivières en Blues Festival is pleased to unveil the first four artists of its program presented at the Cogeco Amphitheatre from Thursday, August 22 to Saturday, August 24, 2019. Indeed, the festival announces the arrival of one of the biggest rock music female icons, Melissa Etheridge, famous band Los Lobos, talented quartet Vintage Trouble and veteran guitarist Coco Montaya. Fans are therefore invited to a key blues music event for a promising 11th edition.

Festival begins strongly with Melissa Etheridge who just released her 15th studio recording, The Medecine Show, on April 12th. With many honors including Grammy and Oscar awards in her hand, the singer-songwriter has built her popularity around memorable songs such as Bring Me Some Water, No Memories and Is not It Heavy. Etheridge also had great commercial and artistic success with his fourth album, Yes I Am, which features I'm the Only One and Come to My Window, which has been crowned six times platinum. Known for her confessional lyrics and her hoarse and smoky voice, Melissa Etheridge will certainly launch the festivities of this 11th edition of Trois-Rivières en Blues with grandeur, splendor and emotions.

Popular Mexican American band Los Lobos will be the star of the Saturday night program. The 6-member band gained their reputation to the public in 1987 for its wild version of La Bamba (Ritchie Valens). With the incomparable guitarists and singers David Hidalgo and Cesar Rosas, in addition to the excellent multi-instrumentalists Louie Pérez and Steve Berlin, Los Lobos offers a hybrid of styles. From rock, tex mex, blues, country, cumbia and bolero to many types of traditional Spanish and Mexican music, the musical styles cohabit harmoniously and for our greatest pleasure.

Rhythm 'n' blues, soul and rock band Vintage Trouble will also be on stage on August 24. Travelling the globe, it is in concerts that Vintage Trouble attracts the most praise and nourishes its legend. Selected to be on the prestigious Mediterranean Keeping the Blues Alive at Sea cruise from August 16 to 21, 2019, the band then arrives for the first time in Trois-Rivières for a frenzied and memorable concert.

67-year-old musician and guitarist Coco Montoya will also host this blues night with his legendary bluesman talent that has taken him to most major blues festival on the planet. Since 1993, Coco Montoya's solo career has given nine solo albums and the artist continues to entertain us with his incendiary notes and his extraordinary control on the guitar neck.

All the shows presented at the Cogeco Amphitheatre will be accessible thanks to the festival passport, which is priced between $ 72 and $ 112 (plus taxes) in the sitting section of the amphitheatre and $ 35 (plus taxes) in the grass section. In addition, passports giving access to the Privilege Zone will be on sale for $ 300 (plus taxes). All are on sale now at www.3renblues.com , at www.amphitheatrecogeco.com , at the J.-Antonio-Thompson box office and at 819-380-9797. The advertised prices are now valid until July 30 and are subject to change after this date.