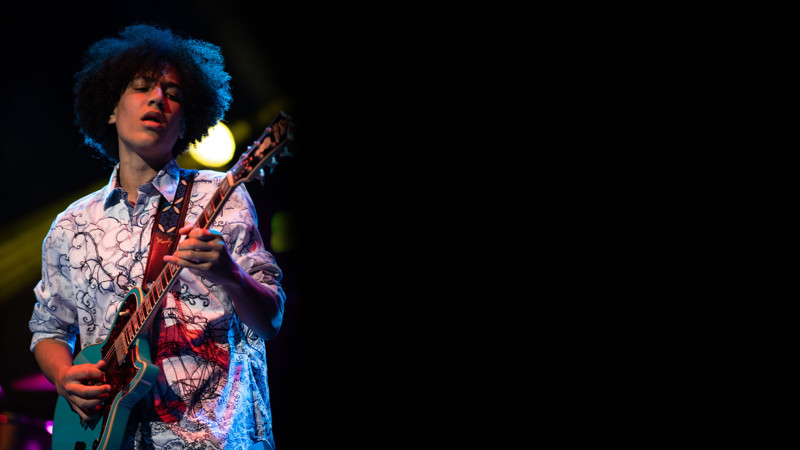 Admission: Passport starting at $68.50 (Plus taxes)

The 2003-born New York actor and guitarist arrives like a first-grader who loves recess! Although he played in the Broadway musical School of Rock, it was his mastery of the blues guitar that turned heads and predestined him for this noble calling at only 19 years old. Like the young Jamiah Rogers who was treading the Badeaux Street stage at the same age, Niederauer had already traded solos before the age of 15 with Greg Allman, Derek Trucks and Warren Haynes (Gov't Mule) as well as Buddy Guy, Stevie Nicks and Lady Gaga, not to mention an appearance with the legendary German band, The Scorpions! He has been seen on The Ellen Show, The Late Show With Stephen Colbert, The View to mention a few prime time TV shows. He has been compared to the little Tasmanian devil because of his frenetic guitar playing. A first at the festival and certainly not a last. Talent to spare!

Passports
All shows presented at the Cogeco Amphitheatre will be accessible with the festival passport available from $68.50 (plus taxes). Passports giving access to the Privilege Zone will be on sale for $305.50 (plus taxes). All passports give access to all three nights of the festival and will go on sale on Friday, June 3 at 11:00 a.m. Passports will be available at 3renblues.com, amphitheatrecogeco.com, at the J.-Antonio-Thompson Hall box office from Monday to Saturday from 11:00 a.m. to 6:00 p.m., at the Cogeco Amphitheatre box office from Wednesday to Saturday from 11:00 a.m. to 6:00 p.m., and by phone at 819 380-9797 or at 1 866 416-9797